I must have read Amy's mind, because a week or so before I received the October Challenge technique, I had been messing around with wall-pour soaps. I've been doing these quite sometime, but mostly using a regular mold. Vinvela Ebony who created the lovely Dandelion technique had a series of tutorials I found somewhere where she featured this technique. I do all kinds of things with it.
In the example on the left, I did alternating pours with the red and white with thin traced soap, then dumped in the mustard yellow. Each bar is so cool--never know what you're going to get!  This is my standard go-to technique for Sandalwood Patchouli soap. Here's one I did using a skinny mold before Amy announced the challenge.
This scent makes my mouth water. It's been wildly popular at the craft show--black cherry almond. I wish I could enter this one, but alas, I can't, but I didn't  mind having to make another one because it really is a fun technique and always lovely.

I chose Wholesale Supplies Plus, Black Amber Musk, because it smells divine and sells well as a uni-sex scent. It's hard to describe, but it's soft and sexy. For most scents, it's fairly easy to come up with a color scheme, but this one confused me. I've grappled with blues and greens, another time turquoise blue and navy. Well, amber is amber, but what color is musk? If you Google what is musk, you get this: "A strong-smelling reddish-brown substance that is secreted by the male musk deer for scent-marking and is an important ingredient in perfumery." Now, I  generally like to match my colors with my scents, but in some cases, a literal interpretation might not be the best. But, if you do a Google Image search for the "color of musk" you get this:  I like purple, so that's what it's going to be. 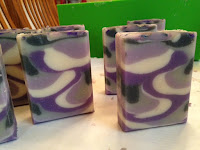 All my colorants for this soap came from Nuture Soaps. I chose 5...dark purple, light purple, white, grey, and black which would appeal to my male buyers.
I poured every color down one side, then switched down the other, repeating till I was done. I tilted my mold using a "Better Homes & Garden Cookbook." which gave it a pretty good tilt--much more than the demo. My batter was a little thicker than anticipated. Black Amber Musk has never accelerated on me before. Frankly, I think I just over mixed a bit; however, it stayed pourable the whole time. I oven processed these in a 170 degree for about 30 minutes--just enough to get the gelling process going and then took it out to do it's thing.

I wanted the black to be minimal, but it ended up being black spots down the sides. Not bad, really, but not what I wanted. I liked the S curves though. I think this technique works best with 4 colors for this particular look. I am so stinking excited to see what everybody comes up with!
Posted by Soapin' Cindy at 2:55 PM 10 comments: