I was very excited that we were going to be doing glycerin mica swirls for this month's challenge. I did this technique once before on a pumpkin soap and while it was really cool and elegant, I don't think a pumpkin soap was the right vehicle to carry off the glam imparted by this technique. 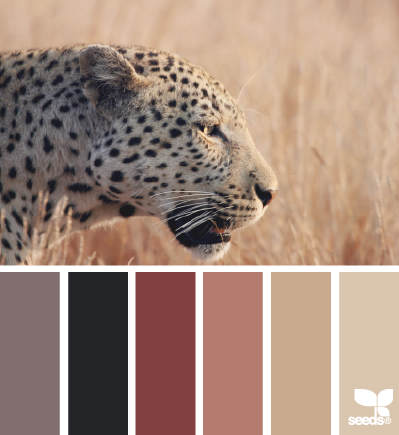 I wanted to do a soap that was dark, exotic and sexy, so I decided on a sandalwood patchouli soap. Is there anything sexier than patchouli and sandalwood? I'm a sucker for real patchouli so I used the real deal along with a FO sandalwood. I was having a hard time coming up with a color scheme, so I turned to design seeds for inspiration and came across this swatch called "creature tones" Now, this was a sexy color scheme. Reminds me of my brief stint as a divorcee dating younger men and wouldn't it go great with sandalwood patchouli? I don't think non-soap makers realize the dozens of little decisions that occur even before the first oil is pulled off the shelf. 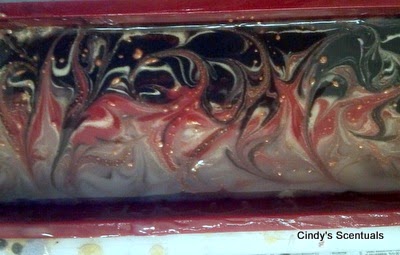 Now, what to do with these colors? I decided on a modified dandelion technique using wide bands of my colors separated by the neutral base and then swirled lightly with a hangar. I used a recipe that included sunflower that would give me plenty of time to play. For the purple, I was excited to try out a new order of Purple Brazilian clay. The black was made with activated charcoal and the burgundy, a mix of merlot sparkle mica and red oxide. For the top swirls, I went with white sparkle mica mixed with oil and 24K gold mica with glycerin. I thought they'd make a nice contrast with base colors. 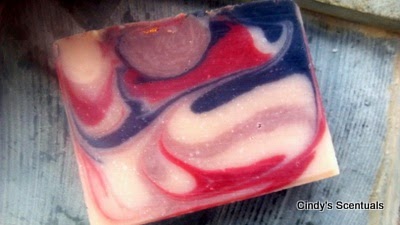 Thinking back to the time I used glycerin on my pumpkin soap, I was astounded at the cavern carving capacity of the glycerin...carved a little Grand Canyon river system on my soap top! For my challenge soap, I didn't want the river system, so I planned to go much lighter this time. Here's how it looks right after I swirled. The white mica shows as the white swirled through the black. The gold mica glycerin pools up as little beads. The next morning it looked like this: 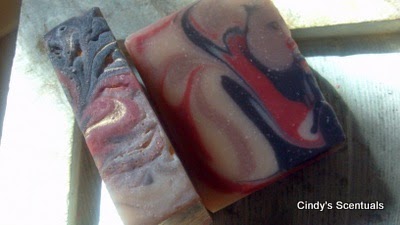 One of the profound joys of being a soap maker is waking up the next morning and unmolding soap. I get a little flutter of excitement just like I'm eight years old again waking up Christmas morning. Will these "creature" colors really work? Did my swirl work? Ahh...the sound of my soap cutter gliding through 11 perfect bars of sandalwood patchouli! I was very happy with the results...ended up more tiger-striped than I thought, but it certainly works with my cougar, sultan sexy theme and that's what I'll call it...Sultan's Sandalwood & Patchouli. Thanks Amy for putting on these challenges. It's soap maker paradise going through everyone's posts about their soaps.
Posted by Soapin' Cindy at 7:15 AM 10 comments: