Now, who but a soap maker would rejoice over a new mold in their house? ;) My brother visited from Tallahassee last weekend to drop off his first born son in Cleveland to a new job and a lovely fiancee attending Case Western Reserve University. As it happens, my brother is a master wood craftsman, so a few months ago, knowing he was going to be traveling this way, I asked him if he'd make me a few molds and we'd barter for soap. I make a few skin products--a face serum and a whipped shea butter, and of course the soap, that he enjoys, so we traded soap and body products for mold. I've long been coveting the tall mold because, to me, they scream artisan elegant! 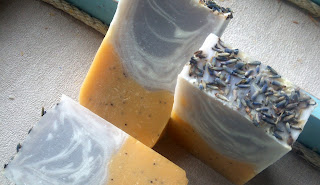 I decided on a half-half type soap, lemon and poppy seed specked on the bottom, and wispy lavender swirled with white on top. My husband loves my soap, but he's quite vocal about certain soap issues--namely that his soap not have "stuff" on top--in this case, wall-to-wall lavender buds. He doesn't mind so much "stuff" embedded in the soap, like oatmeal, adzuki beans, or poppy seeds, but he draws the line at potentially drain clogging "stuff" on top. I've listened to him, up to now, but this soap is for my show and I know women love this stuff--he can head to my soap scrap graveyard for his next shower. Here it is: I finally figured out a decent ITPS! It seems like the easiest technique, but  managed to elude me for a good long time. This is very close to the Holly Swirl, had my soap been a bit more fluid and penetrated the bottom layer. I'm taking notes! I've done a few Christmas soaps for the October show, but I'm going to do one more attempt on the Holly Swirl using green, red, and white.

As I've mentioned before, I've really been sitting on the fence about fragrance oils. Up to now, I thought I'd use essential oils only, but now I'm missing out on doing certain scents. It doesn't have to be an all or nothing proposition...I can do a line with essential oils, a line with fragrance oils and a totally naked line with no added scent. It appeals to me as an artist and would certainly appeal to a wider range of customers. Win-win.

I officially entered the next Great Cake Soap Cake Soap Challenge for the multi-colored gradient challenge. This is going to be a challenge for me--on so many levels--but I'm up for it and can't wait to see what everyone comes up with. I'm just happy to be mingling with the soap masters!
Posted by Soapin' Cindy at 5:31 PM 4 comments: 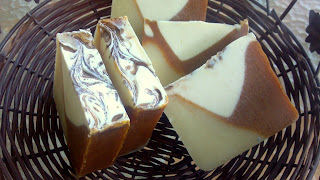 I've been following the Soap Bar's challenge series for awhile now. I read up on everyone's results. It's so fascinating, and I learn so much it's ridiculous. I'm a barely walking--maybe still crawling soap newbie with just about a year of experience. I'd say three batches out of every 10 come out exactly as I planned. Some come out better than I planned, but most of the time I totally miss the mark on creating the elusive vision in my head. My latest quest, an abstract elegant pumpkin soap, came out pretty close to the vision, but now I'm thinking my vision a bit myopic. I did an angled soap, three layered angles, starting with a natural soap at the bottom, a pumpkin layer in the middle (yes, real pumpkin!) and the top a super white creamy top (no, not real cream...just too much titanium dioxide). I topped with a glycerin mica oil swirl of gold and bronze. I just learned that from the Great Cakes gal, so thought I'd give it a shot. My daughter questioned the drizzle over whipped cream, but I said, "Heh...this is abstract elegant pumpkin...imagine it's a caramel glaze!"

Now for the scent...here's where I struggle..it's hard to get a good pumpkin scent using essential oils..sure I can use ginger, clove, and cinnamon, but it's not the same as those pumpkin pie synthetic fragrances. Sure there's real pumpkin, but pumpkin mixing with lye doesn't translate. I don't use fragrance oils, because I feel they somewhat defeat the purpose of handmade soap, but then again, these particular essential oils can be just as irritating in certain amounts as synthetic fragrances. I'm still sitting on the fence about essential vs fragrance oils, but for the time being, I use only essential oils. Another thing that keeps me on essential oils are all the horror soap stories about uncharted fragrance oils causing soap to crawl out of it's mold. Soap making is messy enough...just don't need that that aggravation.

While reading about the Soap Challenges, I've been a little obsessed about the "Holly Swirl" a technique named from the lady at Missouri River Soaps. She's awesome. I stop by frequently to drool over her soaps. I tried it first with my cucumber calendula soap, but  even though it was much too thin and just sunk to the bottom and a total fail on the Holly front, it's still one of my summer favorites. Here it is.

My second attempt at the Holly Swirl is in the oven for the oven part of the CPOP. My plan was to do a white base and my ITP Holly Swirl would be a black-fushia pink combo. I used a different recipe that I knew would be slightly fluid but medium thick. While I've never have destroyed a soap batch, me and colorants have had a long hard painful education...I mess them up a lot. When using activated charcoal, I fear ashy gray and tend to overcompensate with too much which subsequently discolors lather and destroys the household white wash cloths. I read somewhere that grey in the soap phase turns darker later, so that's what I was going with when I added about a half teaspoon to my 12 ounces of soap for the Holly. I put in the pink just like all the You-Tubes and videos advise and plopped it in the white base then swirled with chopsticks. It looked like pink-tinged grey sludge, but I'm really keeping  my fingers crossed. Here's what it looks like just out of the oven...going through its gel phase. 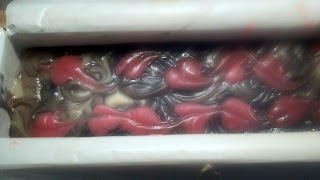 My daughter added the heart line embellishment to the top. She's heavily influenced by somber dirge bands like Black Veil Brides. I'm calling this: Charcoal Bleeding Heart Soap. Can't wait to see the inside. Just like the colors--black, pink, and white, I scented with something equally contrasting... light lavender, lemongrass, and exotic, sultry patchouli. I don't know if this is appropriate for the fall show and Christmas Show, but what the heck. It might just end up being one for the family soap shelf.
OK...it didn't turn out at all. The pink in the black swirls just faded into the black. Not sure why this happened--not enough pink? too thin? It's enough to drive a soap maker to madness. I haven't even taken a picture of it. It's still beautiful...I'm going to call it Charcoal Bleeding Heart because the inner swirls are dark and somber like a recent breakup.

I Changed My Blog Name...

Well, I had to do it. It started off soap and dirt because I thought I was going to post about my gardening efforts as well as my soap. Life happens, though...I'm still gardening and growing good things to put in my soaps...just didn't have the time to blog about it.
Posted by Soapin' Cindy at 4:50 PM No comments:

Graphic, Labels, and Logos--Oh my!

I've really been struggling with all of these things. First, my Etsy banner--I perused hundreds of banners before I decided on one with a light blue background, stylized botanicals with Cindy's Scentuals floating off the top like seeds in the wind. I really liked it, but once I filled up my shop with a dozen of my soaps, it just didn't seem to fit both my shop photography style, my name, or what I'm ultimately trying to convey as soaps being olfactory slices of bliss and sensual experience. Here's the banner I was using:

I decided to take the banner off when I read an Etsy article how no banner is better than bad banner that doesn't make your shop look cohesive, but I didn't like going naked either, so found another article about how to create your own on GIMP. The article made it sound so easy, but it took me an entire Friday evening sweating and fretting to come up with something. I pieced my banner with actual soaps from my shop. Funny, but my main soap star was an early ugly duckling out of the mold, my cucumber calendula soap. Here it is at my shop.  It's not at all like the vision I had in my head, but after a good long cure--a swan! And one of my current favorites: 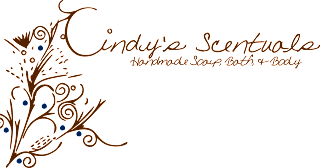 I had my nephew come up with a logo...it's similar in theme to the first Etsy banner but more sensual, I think. I'm having issues with the "indy" coming off the bottom of the "C". He had it coming off the top, initially, but it didn't look right to me so I had him change it. He was right, I was wrong, cause now I have issues getting my logo to tuck nicely into label corners, but can't because of the change.  Lesson--leave it the professionals!  Sheesh!  Who knew??? Here it is: 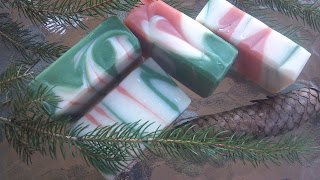 Here's the latest for the curing rack--a Christmas scented soap with essential oils of rosemary, bay, fir, fennel and orange.

My next is going to be an abstract rendition of a fall season favorite--pumpkin soap. Stay tuned. So excited!
Posted by Soapin' Cindy at 5:46 PM No comments: